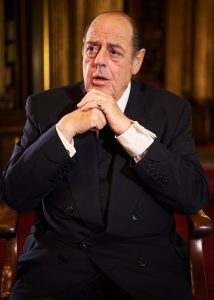 The Society will hold its annual Sir Winston S. Churchill memorial dinner, not at Chartwell but at an alternative private venue this year. Our guest speaker is Sir Nicholas Soames, the son of the late Lord Soames and the grandson of Sir Winston Churchill.

After service in the Army with the 11th Hussars, Sir Nicholas was Equerry to HRH The Prince of Wales, served in the United States Senate, worked in the City of London and then entered Parliament as a Conservative Member from 1983 to 2019. During his long and distinguished career in Parliament, he held senior roles including Minister for Defence and Minister for Agriculture, Fisheries and Food.

Sir Nicholas has a specialist knowledge in the fields of Anglo-American defence and security in the Middle East, Europe, international affairs, trade and industry, aviation and the countryside.  He currently serves as President of the Conservative Middle East Council and holds several advisory roles.

Members will be invited to purchase tickets.